I wish I could beam the kitchen and the staff of La Dame de Pic directly into my apartment. Of course, I think I only have room for one of the beautiful white lamps and the chef hats are probably too tall for the ceiling. What I could do is kick out the children, raise the ceiling and create one enormous cooking space. No doubt I would be the one kicked out!

This magnificent kitchen I’m gushing over has a glass window facing the street and an open format inside so both the public and the diners can view the group of young chefs make their Michelin-star magic. Led by head chef Xavier Jarry, the team silently – with only an occasional “oui, chef!” issuing forth – prepares each dish without wasting food, space, movement or even a breath. They’re like a mythic team of culinary ninjas whose actions appear and disappear in an instant, leaving only awe-inspiring dishes in their wake.

I would love to be like them, a beautiful machine of precision, grace and perfection. The closest I get is daydreaming I’m Kung Fu Panda who cooks steamy noodle dishes with one hand and defends the weak and vulnerable with the other. Why doesn’t Hollywood make a movie about a non-DreamWorks superhero chef??? I’ll write to them later.

Before I stop rambling, I do have to mention one sublime dish served for lunch the day I was there. I don’t remember exactly what was written, but I do recall that part of the description was “boiled egg” and another part mentioned “mushrooms.” This was the only time the Pic ninjas completely failed in precision and accuracy.

There was no boiled egg nor were there any mushrooms. When the dish arrived, there was just a perfectly-formed, glistening orb of bliss that was nestled on top of a delicate mandala of divine balance whispering, “Worship me.” After several seconds of spiritual shock, I somehow snapped out of it and broke the orb. Streams of gold trickled forth and transformed the dish into everything glorious about human existence! I fell back into a state of shock for a second time, never to look at an egg or a fungus in the same way again. 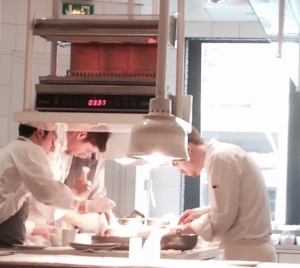 RCL is a « Random Chinese Lady ». The author is not random, nor Chinese and sometimes not very « ladylike », but the adopted title fits well for such a misfit. RCL is American and Italian and lives in Paris with two entertaining kids. Her main aspiration is simple – to enjoy family and friendship through food!